Amino Acid Therapy and How It Relates To Trichotillomania

We have covered a lot about the science of amino acid therapy and how it relates to trichotillomania.  Here is the next in a series of posts: 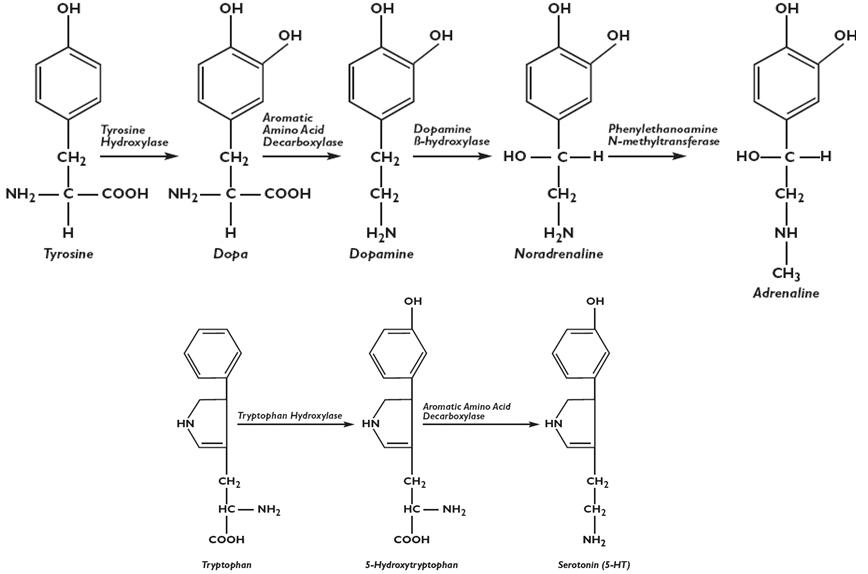 Figure 3: The synthesis of serotonin, dopamine, norepinephrine, and epinephrine from amino acid precursors.

The synthesis of serotonin and the catecholamines (i.e., dopamine, norepinephrine, and epinephrine) is illustrated in Figure 3. Note that the same enzyme catalyzes the conversion of 5-HTP-to-serotonin and L-dopa-to-dopamine everywhere in the body. The implications of this fact are profound.10 The administration of only 5-HTP or L-dopa will compete with and inhibit the synthesis of the opposite precursor (dopamine and serotonin respectively) at the enzyme. This means that if you take only 5-HTP (serotonin system) or only L-dopa (dopamine system) you will decrease the synthesis of the other system (dopamine or serotonin respectively).57. This is why it is so important to have properly balanced amino acids when you are attempting to increase neurotransmitter levels. If you take only one amino acid precursor, the administered amino acid precursor will dominate the enzyme and compromise proper synthesis of the other system’s neurotransmitters, creating further imbalance.

In the same manner, the same two enzymes –  Monoamine Oxidase (MAO) and Catecholamine-O-Methyl Transferase (COMT) – metabolize both serotonin and the catecholamines (i.e., dopamine, norepinephrine and epinephrine).The implications are equally profound.  When neurotransmitter levels are increased, enzymatic activity also increases.14,23, 24, 25, 26 That means that the levels of these two enzyme systems are not static; they fluctuate in response to changing neurotransmitter levels.

If you administer L-dopa or 5-HTP, the activity of MAO and COMT increases due to the increase in dopamine or serotonin levels respectively. The problem is that when L-dopa is administered without 5-HTP, both dopamine and serotonin will be subjected to increases in metabolism by these two enzyme systems. However, serotonin will not experience an increase in production (because none was taken), which leads to further depletion. The same rule is true of 5-HTP administered without the use of dopamine precursors. The bottom line is that the administration of 5-HTP or L-dopa that is unopposed or improperly balanced with the amino acid precursors of the other system will deplete the other system as a result of the increased metabolism of MAO and COMT, decreased synthesis, and uptake competition.

This means that a person has to take these amino acids in the proper balance to obtain long-term balance in neurotransmitter levels. This is complicated further due to uptake competition, which we will cover in future blog posts.